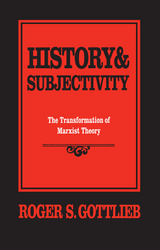 History & Subjectivity
by Roger Gottlieb
Temple University Press, 1987
Cloth: 978-0-87722-494-5
"...rescues the probing spirit of Marx from the dead hand of Marx-ism. In this bold and argumentative book, Gottlieb joins other contemporary theorists in challenging the primacy of class and relations of production as keys to understanding our collective predicament. The result is an important contribution to left theory- both for its summation of the insights drawn from recent movements and for its provocative confrontation with the wisdom of the past."

Can Marxism still serve the American left? History and Subjectivity answers this question by synthesizing the conflicting perspectives of traditional Marxism, Western and neo-Marxism, socialist-feminism, and various minority political movements into a comprehensive and original social theory.

In the last seventy years, social change and the failure of leftist movements have made it necessary to transform Marxist theory. Undermined by its own theoretical success, traditional Marxism mistakenly assumed that Marx's understanding of competitive capitalism could be the model for theories of any society. Roger Gottlieb argues convincingly that the transformation of Marxist theory requires a fundamentally new understanding of social primacy.

Gottlieb draws on resources from virtually all areas of contemporary radical social theory. This interdisciplinary approach results in a sweeping synthesis of existing Marxist thought and an original and compelling social theory.

"Roger Gottlieb has written a very rich and often brilliant book.... [His] general thesis is developed, argued, and tested in the course of an impressive series of reconsiderations of debates in the Marxist tradition--impressive for the sheer breadth of the material mastered, as well as the critical acumen with which Gottlieb finds his way through the thicket of arguments and counter arguments. The result is an always lively, frequently exciting journey through the Marxist tradition, as well as a major contribution to the transformation which Marxism is currently undergoing."

"This is a serious and ambitious book. Its attempt to incorporate socialist feminism, and its interesting discussion of the American left are major strengths. It is a distinctive argument, framed within a personal sensibility, which should encourage wide response."