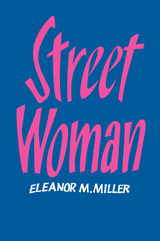 "Miller's firsthand report of female offenders documents a picture of contemporary female criminality.... Street Woman is field research at its best. The reader will be angered and disturbed, enlightened and absorbed."

In this rich, well-written study, Eleanor Miller analyzes the social organization of street hustling and the lives of the women involved in it. Miller views hustling as "illegal work": prostitution, fraud, forgery, embezzlement, and larceny. Using information garnered from life histories and interviews with 64 female street hustlers in Milwaukee, she vividly describes a female underclass recruited to the world of the street for a substantial period of their lives.

Street Woman offers a challenging alternative to recent sociological studies that view the "women's movement" as directly linked to the increasing participation of women in property crime. Miller shows that this increase in crime is a response to sustained poverty. Thus, many sociologists are out of touch with the typical female criminal in this country on both a demographic and personal level. "Typical" female hustlers, as their own words poignantly reveal, are young, poor minority women who have limited education and skills and who also have several children of their own. They adopt characteristic interpersonal relationships and familial forms that insure their survival but which leave the youngsters at greater risk of being recruited to street life.

Street Woman is a work of great importance to sociologists and criminologists alike, both in its ramifications for public policy and its explicit implications for further research. Most important, Miller's desire to render a more personal portrait, to enable us to "at least recognize the individual in the picture painted of the group," leaves the reader with haunting portrayals of the women who struggle to survive in the violent, desperate, drug-ridden world of the street.

"This book deserves a large audience for it provides convincing detail on the recruitment of women to this kind of demi monde and spells out for us a far more persuasive social process than that anticipated in more abstract models. Like the best of our ethnographics research it provides both a refinement of existing theory and a descriptive document that can outlast existing theory."