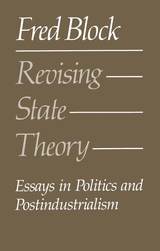 This volume makes available in one place a complete statement of Fred Block's perspective for students and participants in the ongoing debate on state theory. His substantial Introduction serves as an intellectual autobiography in which he assesses the field-including the theories of Domhoff, Poulantzas, and Skocpoland situates his own work within it. Block also discusses his relationship to different strands of Marxism.

In his analysis of the relationship between business and the state, Block argues that while business interests have far more influence over state policy than other constituencies, state actors still have substantial autonomy in formulating policies. In particular, the business community's internal divisions and difficulties in assessing its own interests limit its capacity to control events. Block insists that when business influence is greatest, as during the Reagan years, state policies will be least successful in solving the society's problems.

"What is at work here is a relatively simple sociological dynamic--that institutionalized relations of power tend to become visible only when they weaken. When these institutionalized relations are most effective, they tend to be invisible, precisely because the justifying ideologies so dominate people's commonsense understandings. The classic recent example is the existence of women's subordination. In the fifties, people would have responded to the claim that women were systematically discriminated against in American society with incredulity because they had so totally accepted an ideology that justified differential treatment of men and women as normal and natural. The full-blown analysis and critique of male domination emerges only in the seventies, when patriarchal arrangements are already weakening....

"In state theory, the development is analogous. In the fifties, pluralist arguments dominate because the exercise of power has been rendered invisible. The relation between business and the state works so well that it leaves few traces. Moreover, there is little real debate about how the society should be structured, so the extent to which everyone's basic assumptions fit with the interests of corporate capitalism is not at all obvious. Since nobody was even asking the big questions of who should make investment decisions and how should income and wealth be distributed, it was not apparent that the narrow limits of debate fit exactly with the interests of business.... However, the cumulative impact of Vietnam and racial conflict in the late sixties, the drama of Watergate, and the growing economic difficulties of advanced capitalist societies in the early seventies served to make the exercise of power in American society widely visible. The previous functional relation between the state and business had been disrupted and the efforts by each side to advocate its own interests became more apparent."

--From the Introduction
TABLE OF CONTENTS
Contents
Preface
Introduction
1. State Theory in Context
Part I
2. Beyond Corporate Liberalism
3. The Ruling Class Does Not Rule: Notes on the Marxist Theory of the State
4. Cooperation and Conflict in the Capitalist World Economy
5. Beyond Relative Autonomy: State Managers as Historical Subjects
Part II
6. New Productive Forces and the Contradictions of Contemporary Capitalism: A Postindustrial Perspective (with Larry Hirschhorn)
7. The Myth of Reindustrialization
8. Postindustrial Development and the Obsolescence of Economic Categories
9. Political Choice and the Multiple "Logics" of Capital
Notes
Index
REQUEST ACCESSIBLE FILE