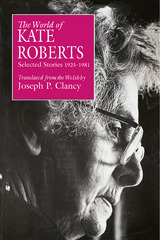 Kate Roberts (1891-1985) was the foremost twentieth-century prose writer in the Welsh language. She produced a considerable body of fiction, seven novels and novellas and nine collections of short stories, and was active in the Welsh Nationalist Party as a publisher and a literary and political journalist. A contemporary of D. H. Lawrence, Katherine Mansfield, and Sherwood Anderson, she created the modern form of the short story in Welsh, and through six decades of writing earned a place with this century's masters of the genre.

The World of Kate Roberts offers in English a large selection of stories, many previously, untranslated, that span her long writing career. Joseph P. Clancy's translations convey the intensity, the insight, and the distinctive prose style with which this Welsh-language writer illuminates her characters' often heroic ordinary lives. This book contains twenty-seven short stories, two short novels, and "Tea in the Heather," eight linked stories of childhood in North Wales at the turn of the century. Excerpts from her autobiography provide background for the non-Welsh reader and an Introduction presents Kate Roberts' life and work largely through her own words.

The experience of poverty is the vital center of Kate Roberts' fiction: material poverty in the slate-quarrying villages of North Wales and the coal-mining communities in the south at the turn of the century and during the Depression; and the cultural, moral, and spiritual poverty of contemporary life in a small town. This poverty defines the experiences and tests the resources of her characters. Her concern was to record, to examine, and to celebrate without sentimentality the life of the close-knit society in which she had grown up. What is most characteristically Welsh in Roberts' vision is that fellowship, membership in a community, is essential to the realization of the human self. "We never saw riches," observed Kate Roberts, "but we had riches that no one can take away from us, the riches of a language and a culture."
AUTHOR BIOGRAPHY
Joseph P. Clancy, a poet and a leading translator from the Welsh, is Professor Emeritus of English Literature and Theatre Arts at Marymount Manhattan College.
REQUEST ACCESSIBLE FILE