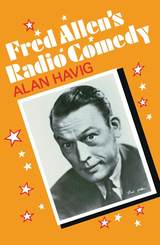 "A notable example of radio at its best."

In 1954, James Thurber wrote: "You can count on the thumb of one hand the American who is at once a comedian, a humorist, a wit, and a satirist, and his name is Fred Allen." Several decades after his death and more than forty years since his radio program left the air, Fred Allen's reputation as a respected humorist remains intact. In this book, Alan Havig explores the roots of his comedy, the themes it exploited, the problems and challenges that faced the radio comedy writer, and Allen's unique success with the one-dimensional medium of radio. Tracing a career that lasted from 1912 into the 1950s and encompassed vaudeville, Broadway revues, movies, radio, and television, Havig describes the "verbal slapstick" style that was Fred Allen's hallmark and legacy to American comedy.

More than a biography of Fred Allen, this is a study of the development of the radio industry, a discussion of American humor, and the story of how one relates to the other. Using a wide variety of published and unpublished sources, including the Allen Papers, Havig analyzes Allen's radio comedy of the 1930s and 40s within the context of the peculiar advantages and limitations of radio as a medium for comedy. He argues that Allen did not merely transfer vaudeville routines to a non-visual medium as did Eddie Cantor, Ed Wynn, and others. Allen developed a comedic style that depended on word play, sound effects, and on his audience's ability and readiness to imagine a visual world in which his eccentric characters operated.

Havig illustrates his story with numerous examples of Allen's humor, with fascinating anecdotes, and excerpts from radio broadcasts. In accounting for the comedian's success, he deals with vaudeville, comedy writing, sponsor's demands and censorship of material, and the organizational world of radio broadcasting companies.

Describing radio as "an instrument of wit," Fred Allen wrote: "on radio you could do subtle writing because you had access to the imagination...that was why I liked radio. we had some fun." Readers will also have some fun remembering or discovering for the first time Allen's Alley and the magic of radio comedy in its prime.

"Fred was one of the greatest of vaudeville and radio comedians. Anyone even casually concerned with the state of American humor will be well advised to give his work, as Mr. Havig presents it, careful study."

"Alan Havig has done an intelligent, careful and exhaustive research job. This is a well-written, solid performance-biography."

"A notable example of radio at its best." —Back Stage/SHOOT

"Fred was one of the greatest of vaudeville and radio comedians. Anyone even casually concerned with the state of American humor will be well advised to give his work, as Mr. Havig presents it, careful study." —Steve Allen

"Alan Havig has done an intelligent, careful and exhaustive research job. This is a well-written, solid performance-biography." —J. Fred MacDonald, Curator of the Museum of Broadcast Communication, Chicago