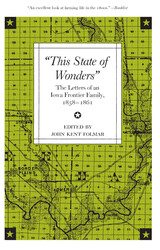 When the John Hugh Williams family immigrated to Homer, Iowa, in the 1850s, they had six children, ranging in age from five to twenty. Suddenly land poor, in debt, and caught in the Panic of '57, they sent their eldest son, James, to Georgia to work and add to the family income.

The seventy-five letters collected here represent the family's correspondence to their absent son and brother. From 1858 to 1861, James' sisters, brothers, mother, and father wrote to him frequently, each with distinct views on their daily life and struggles. While Mr. Williams wrote most often about money, farming, and moral advice (he was minister in the Church of New Jerusalem, as well as a merchant and farmer), Mrs. Williams commented on her daily chores, the family's health, the ever-important weather, and her leisure activities, including the contemporary journals and books she read, such as David Copperfield and Jane Eyre. James' sisters and brothers wrote about many concerns, from schoolwork and housework to games and family celebrations in nearby Webster City.

As the letters continue, the affection for the absent James becomes more pronounced. And, as the years go by, the letters touch on more current national trends, including the Pikes Peak Gold Rush and the growing North/South crisis, on which James and his family strongly disagree. James was never to return to Iowa but married and remained in the South, becoming a lieutenant colonel in the Confederate army.

Complete with voices both young and old, male and female, This State of Wonders offers a wealth of information about the daily life of an ordinary family on the Iowa prairie. It is a book to be treasured by all Iowans interested in the early life of their state and by all historians looking for a complete portrait of family life on the midwestern frontier.