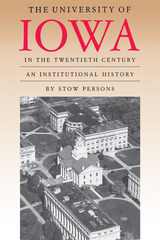 In order to write this exhaustive history, Persons focused his research on the extensive university archive of personal correspondence and reminiscences. The result is a study rich in personality, character, and insight, complete with political and economic drama. The definitive analytical history of the school, this volume captures the vigor and color of the people it chronicles.
Organized by president, this history follows the school’s struggle to establish a major public university in an agricultural state. Persons shows how George MacLean introduced the institutional forms of the modern university and oriented it toward the major state university of the upper Midwest. Walter Jessup was successful in strengthening the faculty and laying the foundations of the modern physical plant. Howard Bowne’s attempt to revivify the school was cut short by the campus uprisings of 1968 to 1970. Since no part of the university has undergone more striking changes than the College of Medicine, Persons has devoted a chapter to the efforts to find an effective organizational pattern for that college. And, in the area of undergraduate education, he outlines the struggle to define and implement a successful general education program.
More than just a recounting of past issues and accomplishments, The University of Iowa in the Twentieth Century also serves to identify a pattern of historical development which will provide a context in which the present issues facing the school can be most fruitfully addressed. This book should be read by everyone interested in the development of the university, educators, higher education administrators, and all those captivated by Iowa history.
AUTHOR BIOGRAPHY
Carver Professor of History Emeritus at the University of Iowa, Stow Persons is a Connecticut native educated at Yale. After a stint of teaching at Princeton, Persons came to Iowa in 1950 as professor of American history. Among his books are American Minds: A History of Ideas, The Decline of American Gentility, and Ethnic Studies at Chicago, 1905–1045. Following his retirement in 1981 he took up the research for this volume.
REQUEST ACCESSIBLE FILE