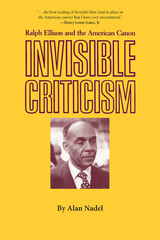 In 1952 Ralph Ellison won the National Book Award for his Kafkaesque and claustrophobic novel about the life of a nameless young black man in New York City. Although Invisible Man has remained the only novel that Ellison published in his lifetime, it is generally regarded as one of the most important works of fiction in our century.

This new reading of a classic work examines Ellison's relation to and critique of the American literary canon by demonstrating that the pattern of allusions in Invisible Man forms a literary-critical subtext which challenges the accepted readings of such major American authors as Emerson, Melville, and Twain.

Modeling his argument on Foucault's analysis of the asylum, Nadel analyzes the institution of the South to show how it moved blacks from "enslavement" to "slavery" to "invisibility"—all in the interest of maintaining an organization of power based on racial caste. He then demonstrates the ways Ellison wrote in the modernist/surreal tradition to trace symbolically the history of blacks in America as they moved not only from the nineteenth century to the twentieth, and from the rural South to the urban North, but as they moved (sometimes unnoticed) through American fiction.

It is on this latter movement that Nadel focuses his criticism, first demonstrating theoretically that allusions can impel reconsideration of the alluded-to text and thus function as a form of literary criticism, and then reading the specific criticism implied by Ellison's allusions to Emerson's essays and Lewis Mumford's The Golden Days, as well as to "Benito Cereno" and The Adventures of Huckleberry Finn. Nadel also considers Ellison's allusions to Whitman, Eliot, Joyce, and the New Testament.

Invisible Criticism will be of interest not only to students of American and Afro-American literature but also to those concerned about issues of literary theory, particularly in the areas of intertextual relationships, canonicity, and rehistoricism.

AUTHOR BIOGRAPHY
Alan Nadel is the Bryan Chair of American literature and culture at the University of Kentucky, where he teaches literature and film. He is the editor of May All Your Fences Have Gates(Iowa, 1993) and the author of Invisible Criticism: Ralph Ellison and the American Canon (Iowa, 1991), Containment Culture: American Narratives, Postmodernism, and the Atomic Age, Flatlining on the Field of Dreams: Cultural Narratives in the Films of President Reagan's America, and Television in Black and White America: Race and National Identity.
TABLE OF CONTENTS
Contents
Preface
Introduction
1. The Origins of Invisibility
2. Translating Tradition
3. Tod Clifton: Spiritual and Carnal
4. Invisible Man in the Golden Day
5. Invisible Criticism: Melville and Emerson Revised
6. Invisible Man, Huck, and Jim
Conclusion
Notes
Works Cited
Index
REQUEST ACCESSIBLE FILE