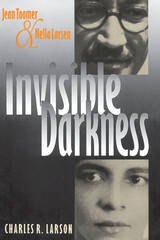 Invisible Darkness offers a striking interpretation of the tortured lives of the two major novelists of the Harlem Renaissance: Jean Toomer, author of Cane (1923), and Nella Larsen, author of Quicksand (1928) and Passing (1929). Charles R. Larson examines the common belief that both writers "disappeared" after the Harlem Renaissance and died in obscurity; he dispels the misconception that they vanished into the white world and lived unproductive and unrewarding lives.

In clear, jargon-free language, Larson demonstrates the opposing views that both writers had about their work vis-à-vis the incipient black arts movement; he traces each writer's troubled childhood and describes the unresolved questions of race that haunted Toomer and Larsen all of their lives. Larson follows Toomer through the wreckage of his personal life as well as the troubled years of his increasingly quirky spiritual quest until his death in a nursing home in 1967. Using previously unpublished letters and documents, Larson establishes for the first time the details of Larsen's life, illustrating that virtually every published fact about her life is incorrect.

With an innovative chronology that breaks the conventions of the traditional biographical form, Larson narrates what happened to both of these writers during their supposed years of withdrawal. He demonstrates that Nella Larsen never really gave up her fight for creative and personal fulfillment and that Jean Toomer's connection to the Harlem Renaissance—and the black world—is at best a dubious one. This strong revisionist interpretation of two major writers will have a major i mpact on African American literary studies.

"Larson's strengths are many: his concept of pairing these two 'lost artists' is tenable, possibly brilliant; his portrayal of Larsen's life is the best I have encountered; his analyses of her two published novels are intelligent and are coherently connected to biographical items; his insights into Cane are important and often refreshing; his provocative approach to Toomer the man is bold and courageous; his experiment with unchronological and intertwined accounts of two lives is deft and successful; and his writing style, on the whole is unobtrusive and clear."—Russell C. Brignano