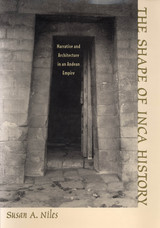 In The Shape of Inca History, Susan Niles considers the ways in which the Inca concept of history informed their narratives, rituals, and architecture. Using sixteenth-century chronicles of Inca culture, legal documents from the first generation of conquest, and field investigation of architectural remains, she strategically explores the interplay of oral and written histories with the architectural record and provides a new and exciting understanding of the lives of the royal families on the eve of conquest.
Niles focuses on the life of Huayna Capac, the Inca king who ruled at the time of the first European incursions on the Andean coast. Because he died just a few years before the Spaniards overturned the Inca world, eyewitness accounts of his deeds as recorded by the invaders can be used to separate fact from propaganda. The rich documentary sources telling of his life include extraordinarily detailed legal records that inventory lands on his estate in the Yucay Valley. These sources provide a basis—unique in the Andes—for reconstructing the social and physical plan of the estate and for dating its construction exactly.
Huayna Capac's country palace shows a design different from that devised by his ancestors. Niles argues that the radical stylistic and technical innovations documented in the buildings themselves can be understood by referring to the turbulent political atmosphere prevalent at the time of his accession. Illustrated with numerous photographs and reconstruction drawings, The Shape of Inca History breaks new ground by proposing that Inca royal style was dynamic and that the design of an Inca building can best be interpreted by its historical context. In this way it is possible to recreate the development of Inca architectural style over time.
AUTHOR BIOGRAPHY
Susan Niles is professor of anthropology at Lafayette College and author of, among others, Callachaca: Style and Status in an Inca Community (Iowa, 1987).
TABLE OF CONTENTS