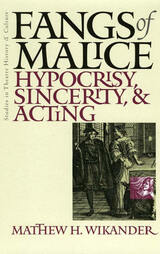 The idea that actors are hypocrites and fakes and therefore dangerous to society was widespread in the seventeenth and eighteenth centuries. Fangs of Malice examines the equation between the vice of hypocrisy and the craft of acting as it appears in antitheatrical tracts, in popular and high culture, and especially in plays of the period. Rousseau and others argue that actors, expert at seeming other than they are, pose a threat to society; yet dissembling seems also to be an inevitable consequence of human social intercourse. The “antitheatrical prejudice” offers a unique perspective on the high value that modern western culture places on sincerity, on being true to one's own self.

Taking a cue from the antitheatrical critics themselves, Matthew Wikander structures his book in acts and scenes, each based on a particular slander against actors. A prologue introduces his main issues. Act One deals with the proposition “They Dress Up”: foppish slavery to fashion, cross-dressing, and dressing as clergy. Act Two treats the proposition “They Lie” by focusing on social dissembling and the phenomenon of the self-deceiving hypocrite and the public, princely hypocrite. Act Three, “They Drink,” examines a wide range of antisocial behavior ascribed to actors, such as drinking, gambling, and whoring. An epilogue ties the ancient ideas of possession and the panic that actors inspire to contemporary anxieties about representation not only in theatre but also in the visual and literary arts.

Fangs of Malice will be of great interest to scholars and students of drama as well as to theatre professionals and buffs.

AUTHOR BIOGRAPHY
Matthew Wikander is professor of English at the University of Toledo and the author of The Play of Truth and State: Historical Drama from Shakespeare to Brecht and Princes to Act: Royal Audience and Royal Performance, 1578–1792. He is a founding member of the North Coast Theatre, which performs in the galleries and for special exhibitions at the Toledo Museum of Art.
TABLE OF CONTENTS
Acknowledgments
Prologue. The Actor as Hypocrite
Act One. They dress up
Scene One. As Secret as Maidenhead
Scene Two. Putting on the Cloth
Scene Three. Humanizing the Fop
Act Two. They lie
Scene One. Rousseau and the Cult of Sincerity
Scene Two. Playing Joseph Surface
Scene Three. Ibsen’s Small Stage of Fools
Scene Four. Princely Hypocrite
Act Three. They drink
Scene One. The Tavern
Scene Two. Liberty Hall
Scene Three. Harry Hope’s Saloon
Scene Four. Contested Sites
Epilogue
Notes
Index
REQUEST ACCESSIBLE FILE