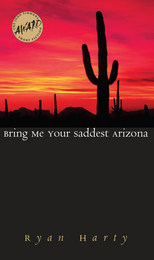 The vast, unsettling landscape of the American Southwest is as much a character in Ryan Harty's debut collection, Bring Me Your Saddest Arizona, as the men and women who inhabit its award-winning stories. In eight vivid tales of real life in the west, Harty reminds us that life's greatest challenge may be to find the fine balance between desire and obligation.

A high school football player must make a choice between family and friends when his older brother commits an act of senseless violence. A middle-aged man must fly to Las Vegas to settle his dead sister's estate, only to discover that he must first confront his guilt over his sister's death. A young teacher tries to help a homeless girl, but, as their lives intertwine, he begins to understand that his generosity is motivated by his own relenting sense of lonliness. Well-intentioned but ultimately human, the characters in these stories often fall short of achieving grace. But the possibility of redemption, like the Sonoran Desert at the edge of Bring Me Your Saddest Arizona's suburban landscapes, is never far off. Harty's characters are as complicated as the people we know, and his vision of life in the west is as hopeful as it is strikingly real.

AUTHOR BIOGRAPHY
A graduate of University of California-Berkeley and the Iowa Writers' Workshop, Ryan Harty grew up in Arizona and Northern California. His stories have been widely published in literary magazines, including Tin House and the Missouri Review, and have received a Henfield-Transatlantic Review Award. He currently lives in San Francisco and teaches at Stanford University, where he was a Wallace Stegner Fellow.
REQUEST ACCESSIBLE FILE