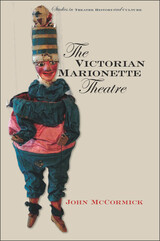 In this fascinating and colorful book, researcher and performer John McCormick focuses on the marionette world of Victorian Britain between its heyday after 1860 and its waning years from 1895 to 1914. Situating the rich and diverse puppet theatre in the context of entertainment culture, he explores both the aesthetics of these dancing dolls and their sociocultural significance in their life and time.
The history of marionette performances is interwoven with live-actor performances and with the entire gamut of annual fairs, portable and permanent theatres, music halls, magic lantern shows, waxworks, panoramas, and sideshows. McCormick has drawn upon advertisements in the Era, an entertainment paper, between the 1860s and World War I, and articles in the World’s Fair, a paper for showpeople, in the first fifty years of the twentieth century, as well as interviews with descendants of the marionette showpeople and close examinations of many of the surviving puppets.
McCormick begins his study with an exploration of the Victorian marionette theatre in the context of other theatrical events of the day, with proprietors and puppeteers, and with the venues where they performed. He further examines the marionette’s position as an actor not quite human but imitating humans closely enough to be considered empathetic; the ways that physical attributes were created with wood, paint, and cloth; and the dramas and melodramas that the dolls performed. A discussion of the trick figures and specialized acts that each company possessed, as well as an exploration of the theatre’s staging, lighting, and costuming, follows in later chapters. McCormick concludes with a description of the last days of marionette theatre in the wake of changing audience expectations and the increasing popularity of moving pictures.
This highly enjoyable and readable study, often illuminated by intriguing anecdotes such as that of the Armenian photographer who fell in love with and abducted the Holden company’s Cinderella marionette in 1881, will appeal to everyone fascinated by the magic of nineteenth-century theatre, many of whom will discover how much the marionette could contribute to that magic.
AUTHOR BIOGRAPHY
A fellow of Trinity College, Dublin, and director of Ireland’s first university theatre department, John McCormick took early retirement in 1998 to work full-time as a puppet researcher and performer. His publications include People’s Theatre, Popular Theatres of Nineteenth-Century France, Dion Boucicault (1820-1890), and (with Bennie Pratasik) Popular Puppet Theatre in Europe, 1800-1914.
TABLE OF CONTENTS
Preface
1. Contexts
2. Proprietors and Practitioners
3. Booths, Barns, and Music Halls
4. Merely Players?
COLOR SECTION
5. The Anatomy of the Victorian Marionette
6. Dramas, Pantomimes, and Screaming Farces
7. Fantoccini and Variety
8. Presenting the Show
9. Apogee and After
Notes
Glossary
Bibliography
Index
Series list
REQUEST ACCESSIBLE FILE