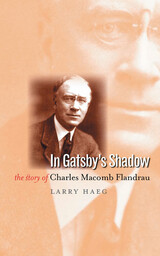 In the closing decades of the nineteenth century Minnesota produced three young men of great talent who each went east to become writers. Two of them became famous: F. Scott Fitzgerald and Sinclair Lewis. This is the story of the third man: Charles Macomb Flandrau.

Flandrau, a model of style and worldly sophistication and destined, almost everyone agreed, for greatness, was among the most talented young writers of his generation. His short stories about Harvard in the 1890s were called “the first realistic description of undergraduate life in American colleges” and sold out of the first printing in a few weeks. From 1899 to 1902 Flandrau was among the most popular contributors to the Saturday Evening Post. Alexander Woollcott rated him the best essayist in America. And Viva Mexico!, Flandrau’s account of life on a Mexican coffee plantation, is a classic, perhaps the best travel book ever written by an American. Yet Flandrau turned his back on it all. Financially independent, he chose a solitary, epicurean life in St. Paul, Mexico, Majorca, Paris, and Normandy. In later years, he confined his writing to local newspaper pieces and letters to his small circle of family and friends.

Using excerpts from these newspaper columns and unpublished letters, Larry Haeg has painstakingly recreated the story of this urbane, talented, witty, lazy, enigmatic, supremely private man who never reached the peak of literary success to which his talent might have taken him.

AUTHOR BIOGRAPHY
Larry Haeg and his family have a home in the Flandrau-Fitzgerald neighborhood of Ramsey Hill in St. Paul, Minnesota. This is his first biography.
TABLE OF CONTENTS