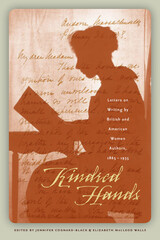 “In Kindred Hands Jennifer Cognard-Black and Elizabeth MacLeod Walls have compiled an extraordinarily useful and lively collection of letters by major British and American literary women from Harriet Beecher Stowe to Jessie Redmon Fauset. Energetic, imaginative, analytic, and keenly committed to their art, all these authors muse on the muse---and often with vivid candor on their own experiences of art and life---in writings that will be fascinating not only to the professional scholar but also to what Virginia Woolf called 'the common reader.'”---Sandra M. Gilbert, coeditor, The Norton Anthology of Literature by Women

“Shedding light on women writers' professional relationships, the politics of the literary marketplace, and the daily struggle to sustain a financially and artistically rewarding career, the letters in Kindred Hands provide valuable---and often poignant---materials toward a history of women's writing from 1865 to 1935.”---Talia Schaffer, associate professor, Queens College and the Graduate Center, CUNY