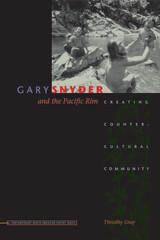 In Gary Snyder and the Pacific Rim, Timothy Gray draws upon previously unpublished journals and letters as well as his own close readings of Gary Snyder's well-crafted poetry and prose to track the early career of a maverick intellectual whose writings powered the San Francisco Renaissance of the 1950s and 1960s. Exploring various aspects of cultural geography, Gray asserts that this west coast literary community seized upon the idea of a Pacific Rim regional structure in part to recognize their Orientalist desires and in part to consolidate their opposition to America's cold war ideology, which tended to divide East from West. The geographical consciousness of Snyder's writing was particularly influential, Gray argues, because it gave San Francisco's Beat and hippie cultures a set of physical coordinates by which they could chart their utopian visions of peace and love.Gray's introduction tracks the increased use of “Pacific Rim discourse” by politicians and business leaders following World War II. Ensuing chapters analyze Snyder's countercultural invocation of this regional idea, concentrating on the poet's migratory or “creaturely” sensibility, his gift for literary translation, his physical embodiment of trans-Pacific ideals, his role as tribal spokesperson for Haight-Ashbury hippies, and his burgeoning interest in environmental issues. Throughout, Gray's citations of such writers as Allen Ginsberg, Philip Whalen, and Joanne Kyger shed light on Snyder's communal role, providing an amazingly intimate portrait of the west coast counterculture. An interdisciplinary project that utilizes models of ecology, sociology, and comparative religion to supplement traditional methods of literary biography, Gary Snyder and the Pacific Rim offers a unique perspective on Snyder's life and work. This book will fascinate literary and Asian studies scholars as well as the general reader interested in the Beat movement and multicultural influences on poetry.
AUTHOR BIOGRAPHY
Timothy Gray is an assistant professor of English at the College of Staten Island, City University of New York.
REVIEWS

“Through a detailed study of Gary Snyder's roots/routes to Asia, Timothy Gray has written an original, historically informed, solidly researched, and finely speculative book on the cultural, ecological, and libidinal geopolitics of the Pacific Rim. Moving beyond the psycho-biography of a single-author study, Gray's text will help to decode the U.S. global imaginary of Asia in interesting new ways.”---Rob Wilson

“In this superb book, Timothy Gray offers a capacious survey of Gary Snyder's contributions to the new American poetry of the 1950s and 1960s as well as to the imagined communities produced through that poetry. By looking at Snyder's relationship to the Pacific Rim, Gray provides a critical regionalist view that contests more entrepreneurial versions.”---Michael Davidson

TABLE OF CONTENTS
Contents
Preface
Acknowledgments
Abbreviations
The Pacific Rim and the San Francisco Renaissance: Two Communities "Taking Place" in Midcentury America
1. Migrating: Exploring the Creaturely Byways of the Pacific Northwest
2. Translating: The Poetics of Linking East and West
3. Embodying: Human Geography and the Way to the Back Country
4. Communing: Tribal Passions in the Late 1960s
Digging In: The Reinhabitation of Turtle Island
Notes
Index
REQUEST ACCESSIBLE FILE