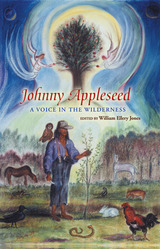 The man popularly credited with planting apple trees throughout the Midwest, John "Appleseed" Chapman epitomizes the American folk hero and pioneer: a man of humble origins who headed west to seek his destiny.

The essays in this collection bring to life the real Johnny Appleseed (1774-1845). A courageous, God-fearing, peaceful, and spartan figure, Chapman was welcomed by settlers and Native Americans alike. He was an unusual businessman -- one who believed that his "wealth" was sown in the trees he planted rather than in banks.

But most of all, Johnny Appleseed was a lover of nature whose respect for all living things was born of his faith. An itinerant "missionary," he provided settlers with "news fresh from heaven" -- pages from the works of eighteenth-century theologian Emanuel Swedenborg.

Editor William Ellery Jones has updated historical essays that explore how Chapman's legend grew both during and after his life.