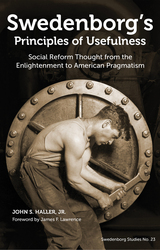 Swedenborg’s Principles of Usefulness highlights Emanuel Swedenborg’s (1688–1772) widespread influence on an impressive host of historical figures—from poets and artists to philosophers and statesmen—and reform movements whose contributions to the evolution of self and society have resonated throughout time and into the present.

As evidenced in the self-reliance of the great Ralph Waldo Emerson, who went so far as to refer to the early part of the nineteenth century as the age of Swedenborg, the socialist tendencies of Henry James, Sr., and the pragmatic philosophy of his highly esteemed son William James, Swedenborg has had a powerful impact on a number of prominent individual thinkers and their lasting traditions.

With love for one’s neighbor sharing pride of place among his ideas, it comes as no surprise that Swedenborg’s outlook on human interaction worked its way into the various social reform movements that vitalized the American landscape during the nineteenth and early twentieth centuries. From the more politically oriented single-tax movement of Henry George to the utopian aspirations of Charles Fourier and the more spiritually inclined social gospel and pastoral clinical movements, those who took Swedenborg’s principles of usefulness to heart sought ways to reflect the divine design in human society.

John Haller’s treatment of the era draws a magnifying glass to those intellectual titans whose fortitude in the face of psychological and social adversities stands as a testament to the robustness of Swedenborg’s concept of usefulness. As James F. Lawrence, Dean of the Center for Swedenborgian Studies at the Graduate Theological Union in Berkeley, California, so aptly states in his foreword, “this book tells stories and builds perspectives that will prove without a doubt to be very useful.”
AUTHOR BIOGRAPHY
John S. Haller, Jr., emeritus professor of history and medical humanities at Southern Illinois University Carbondale, has written on subjects ranging from the history of race and sexuality to medicine, pharmacy, and spirituality. His most recent books include Fictions of Certitude (2020), Distant Voices (2017), Shadow Medicine (2014), The History of New Thought (2012), Swedenborg, Mesmer, & the Mind/Body Connection (2010), and The History of American Homeopathy (2009).