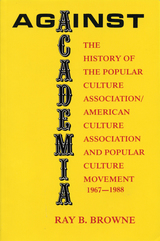 The history of the study of popular culture in American academia since its (re)introduction in 1967 is filled with misunderstanding and opposition. From the first, proponents of the study of this major portion of American culture made clear that they were interested in making popular culture a supplement to the usual courses in such fields as literature, sociology, history, philosophy, and the other humanities and social sciences; nobody proposed that study of popular culture replace the other disciplines, but many suggested that it was time to reexamine the accepted courses and see if they were still viable. Opposition to the status quo always causes anxiety and opposition, but when the issues are clarified, often opposition and anxiety melt away, as they now are doing.
Anxiety and opposition were generated on another level when people in academic and curricular power felt that voices were being raised that questioned their credentials and control. They flailed out with every argument at their command, generally thinking only of their self interest and not that of the students and the future of academic education. Generally this wall of opposition has also been breached.
The Popular Culture Association and its many friends and backers in academia, in the United States and abroad, has demonstrated that the study of our everyday and dominant culure should be taken seriously, understandingly and analytically, just as all other aspects of culture should be. Taken that way the study can be useful in developing better educated and responsible citizens from the cradle to the grave. The humanities and social sciences are too important for any portion—especially the majority portion—to be ignored or downplayed. The study of popular culture constitutes a significant and important element, one that can be ignored only at peril.