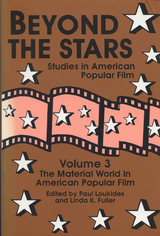 This anthology deals with such diverse conventions as the treatment of food, the iconography of weapons, the paraphernalia of baseball, the uses of clothing, tools, and technologies, and the representation of art and print media within the world of film. The essays within this collection help to reveal how the objects in American movies reflect both the fixed and changeable cultural assumptions of film makers and film audiences.