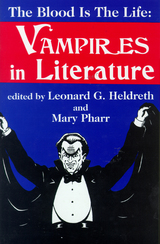 Blood is the Life: Vampires in Literature
edited by Leonard G. Heldreth and Mary Pharr
University of Wisconsin Press, 1999
Cloth: 978-0-87972-803-8
Today the vampire is a major cultural icon and can be found in breakfast foods, comics, television, computer games, films, and books from academic studies to best-selling novels. While readers may be familiar with such figures as Dracula and Lestat, few are aware of the range of the vampire legacy that stretches from the early nineteenth century through the end of the twentieth. The essays in this volume use a humanistic viewpoint to explore the evolution and significance of the vampire in literature. Contributors examine—besides Dracula—characters such as Lord Ruthven, Carmilla Karnstein, Stephen King’s Kurt Barlow, Chelsea Quinn Yarbro’s Saint-Germain, and Anne Rice’s recoded vampires. Other authors investigated include George R. R. Martin, Brian Stableford, Kim Newman, Colin Wilson, Poppy Z. Brite, and Tanith Lee.