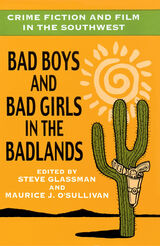 When Joe Leaphorn and Jim Chee, Tony Hillerman’s oddly matched tribal police officers, patrol the mesas and canyons of their Navajo reservation, they join a rich traditon of Southwestern detectives. In Crime Fiction and Film in the Southwest, a group of literary critics tracks the mystery and crime novel from the Painted Desert to Death Valley and Salt Lake City. In addition, the book includes the first comprehensive bibliography of mysteries set in the Southwest and a chapter on Southwest film noir from Humphrey Bogart’s tough hood in The Petrified Forest to Russell Crowe’s hard-nosed cop in L.A. Confidential.