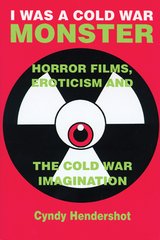 Horror films provide a guide to many of the sociological fears of the Cold War era. In an age when warning audiences of impending death was the order of the day for popular nonfiction, horror films provided an area where this fear could be lived out to its ghastly conclusion. Because enemies and potential situations of fear lurked everywhere, within the home, the government, the family, and the very self, horror films could speak to the invasive fears of the cold war era. I Was a Cold War Monster examines cold war anxieties as they were reflected in British and American films from the fifties through the early sixties. This study examines how cold war horror films combined anxiety over social change with the erotic in such films as Psycho, The Tingler, The Horror of Dracula, and House of Wax.