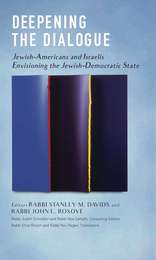 Using the vision embedded in Israel's Declaration of Independence as a template, this anthology presents a unique and comprehensive dialogue between North American Jews and Israelis about the present and future of the State of Israel. With each essay published in both Hebrew and English, in one volume, Deepening the Dialogue is the first of its kind, outlining cultural barriers as well as the immediate need to come together in conversation around the vision of a democratic solution for our nation state.