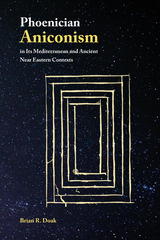 A close look at Phoenician religion

The Hebrew Bible contains a prohibition against divine images (Exod 20:2-5a). Explanations for this command are legion, usually focusing on the unique status of Israel's deity within the context of the broader Near Eastern and Mediterranean worlds. Doak explores whether or not Israel was truly alone in its severe stance against idols. This book focuses on one particular aspect of this iconographic context in Israel's Iron Age world: that of the Phoenicians. The question of whether Phoenicians employed aniconic (as opposed to iconic) representational techniques has significance not only for the many poorly understood aspects of Phoenician religion generally, but also for the question of whether aniconism can be considered a broader trend among the Semitic populations of the ancient Near East.

Brian R. Doak is Assistant Professor of Biblical Studies and Faculty Fellow in the William Penn Honors Program at George Fox University. He is the author of The Last of the Rephaim: Conquest and Cataclysm in the Heroic Ages of Ancient Israel (Harvard University Press) and Consider Leviathan: Narratives of Nature and the Self in Job (Fortress).