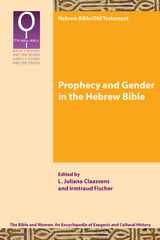 Both prophets and prophetesses shared God’s divine will with the people of Israel, yet the voices of these women were often forgotten due to later prohibitions against women teaching in public. This latest volume of the Bible and Women series focuses on the intersection of gender and prophecy in the Former Prophets (Joshua to 2 Kings) as well as in the Latter Prophets of the Hebrew Bible. Essays examine how women appear in the iconography of the ancient world, the historical background of the phenomenon of prophecy, political and religious resistance by women in the biblical text, and gender symbolism and constructions in prophetic material as well as the metaphorical discourse of God. Contributors Michaela Bauks, Athalya Brenner-Idan, Ora Brison, L. Juliana Claassens, Marta García Fernández, Irmtraud Fischer, Maria Häusl, Rainer Kessler, Nancy C. Lee, Hanne Løland Levinson, Christl M. Maier, Ilse Müllner, Martti Nissinen, Ombretta Pettigiani, Ruth Poser, Benedetta Rossi, Silvia Schroer, and Omer Sergi draw insight into the texts from a range of innovative gender-oriented approaches.

Juliana Claassens is Professor in Old Testament and Head of the Gender Unit at the Faculty of Theology, Stellenbosch University. She is the author of Writing/Reading to Survive: Biblical and Contemporary Trauma Narratives in Conversation (2020) and Claiming Her Dignity: Female Resistance in the Old Testament (2016).

Irmtraud Fischer is Professor of Old Testament Studies at the Faculty of Theology of the University of Graz, Austria. She is the one of the main editors of The Bible and Women series and author of Women Who Wrestled with God: Biblical Stories of Israel’s Beginnings (2005).

TABLE OF CONTENTS
Cover
Contents
Abbreviations
Women in the Prophetic Books of the Hebrew Bible
Part 1. Historical Background
Narrative, Story, and History in the Biblical Traditions about the Formation of the Israelite Monarchy (1 Samuel 9 - 2 Samuel 5)
Cult and War: Contributions of Iconography to a Gender-Oriented Exegesis of Prophecy
Nonmale Prophets in Ancient Near Eastern Sources
Women and Magic Practices in the Prophets (Joshua - Malachi)
Part 2. Female Literary Figures
Profiles of Resistant Women in the Former Prophets
Women in the War Narratives of the Prestate Period (Joshua - Judges)
Gendered Politics: Dynastic Roles of Women in the Narratives about Saul, David, and Solomon
Women at the King’s Court: Their Political, Economic, and Religious Significance in the Accounts of the Former Prophets
Part 3. Gender and Metaphor in the Latter Prophets
Daughter Zion and Babylon, the Whore: The Female Personification of Cities and Countries in the Prophets
The Marriage Metaphor in the Prophets: Some Gender Issues
Do the Prophets Have a Private Life? Women as Literary and Redactional Tools
Between Excruciating Pain and the Promise of New Life: Birth Imagery in the Prophets and Trauma Hermeneutics
Embodied Memories: Gender-Specific Aspects of Prophecy as Trauma Literature
Pornoprophetics Revisited, Decades Later
The Meaning of the Female Presence in Messianic Texts within the Corpus of the Nevi'im
The Never-Ending Search for God’s Feminine Side: Feminie Aspects in the God-Image of the Prophets
Contributors
Ancient Sources Index
Modern Authors Index