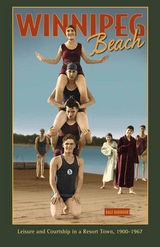 During the first half of the twentieth century, Winnipeg Beach proudly marketed itself as the Coney Island of the West. Located just north of Manitoba's bustling capital, it drew 40,000 visitors a day and served as an important intersection between classes, ethnic communities, and perhaps most importantly, between genders. In Winnipeg Beach, Dale Barbour takes us into the heart of this turn-of-the-century resort area and introduces us to some of the people who worked, played and lived in the resort. Through photographs, interviews, and newspaper clippings he presents a lively history of this resort area and its surprising role in the evolution of local courtship and dating practices, from the commoditization of the courting experience by the Canadian Pacific Railway's "Moonlight Specials," through the development of an elaborate amusement area that encouraged public dating, and to its eventual demise amid the moral panic over sexual behaviour during the 1950s and '60s.
AUTHOR BIOGRAPHY

Dale Barbour is a former journalist and is currently completing a PhD at University of Toronto.