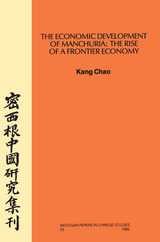 The Economic Development of Manchuria: The Rise of a Frontier Economy
by Kang Chao
University of Michigan Press, 1983
Paper: 978-0-89264-043-0
The economic development of Manchuria holds special fascination, since within the compass of a limited area and a self-contained time span of about one hundred years—between 1860 and 1960—we witness three different types of development patterns, based on three alternative sources of economic growth. The first and longest period, extending roughly from 1860 to 1930, was based on the development of an open frontier, the settlement of a new region. Application of the staple theory of growth to Manchurian conditions can help to illuminate the character of the growth process during this first period. In this connection the Manchurian development case invites comparison with growth processes in other newly settled regions, for example, the US, Canada, and Australia. [1]
AUTHOR BIOGRAPHY
Kang CHAO is Professor Emeritus of Economic at University of Wisconsin-Madison
REQUEST ACCESSIBLE FILE