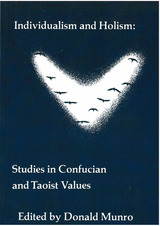 The notion of “individualism” inevitably creeps into the conversation of Americans who try to compare their country with China. It is something we supposedly have and prize which the Chinese do not now have nor probably ever had. For several generations, noncommunists and communists in China have excoriated individualism as the equivalent of selfishness. For them it is a morally insupportable value, not least because it is thought to fragment societies. Inasmuch as the word “individualism” defines a number of different, though related, value concepts in modern usage, the point of departure for our analysis will be the examination of each of these. This approach will enable us to judge exactly what it is we were supposed to have, whether or not the concept has played a role in Chinese society, past or present, and, if so, what significance has been attached to it.
The word “holism” rarely creeps into anyone’s conversation, except, perhaps, that of the sociologist or philosopher. It is a scholarly word. Yet there is considerable overlap between lay remarks about individual interest being subordinate to group interest and the scholar’s technical descriptions of what some holisms expect of people. The ideas suggested by the term are not exclusively scholarly. It seems to point to some Chinese ways of thinking about relations among individuals that contrast with our ways. But if anything, it is vaguer than “individualism.” [1]
AUTHOR BIOGRAPHY
Donald J. Munro is Professor of Philosophy in the Department of Philosophy at the University of Michigan.
REQUEST ACCESSIBLE FILE