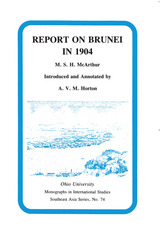 Report On Brunei In 1904: Mis Sea#74
by M.S.H. Mcarthur
contributions by A.V.M. Horton
Ohio University Press, 1987
Paper: 978-0-89680-135-6
In 1904 the British Protectorate of Brunei had reached the nadir of its fortunes. Reduced to two small strips of territory, bankrupt, and threatened with takeover by the Rajah of Sarawak (Sir Charles Brooke), Brunei received M. S. H. McArthur who was dispatched to make recommendations for Brunei's future administration. As a result of McArthur’s Report on Brunei in 1904, the British government decided to underwrite the separate existence of the sultanate, thus giving a reprieve to the “dying kingdom.” The report is the most important document in the history of modern Brunei and is here annotated and given historical context by A. V. M. Horton.
REVIEWS
“Dr. Horton offers a lengthy introduction to the report. In that, and in extensive notes, he offers critical comment on it, identifies persons and places, arbitrates on controversial agreements and correspondence, and offers some account of the early years of the Residency… McArthur’s report was worth printing, both for its intrinsic interest and for its historical importance.”