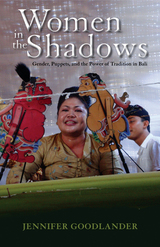 Wayang kulit, or shadow puppetry, connects a mythic past to the present through public ritual performance and is one of most important performance traditions in Bali. The dalang, or puppeteer, is revered in Balinese society as a teacher and spiritual leader. Recently, women have begun to study and perform in this traditionally male role, an innovation that has triggered resistance and controversy.

In Women in the Shadows, Jennifer Goodlander draws on her own experience training as a dalang as well as interviews with early women dalang and leading artists to upend the usual assessments of such gender role shifts. She argues that rather than assuming that women performers are necessarily mounting a challenge to tradition, “tradition” in Bali must be understood as a system of power that is inextricably linked to gender hierarchy.

She examines the very idea of “tradition” and how it forms both an ideological and social foundation in Balinese culture. Ultimately, Goodlander offers a richer, more complicated understanding of both tradition and gender in Balinese society. Following in the footsteps of other eminent reflexive ethnographies, Women in the Shadows will be of value to anyone interested in performance studies, Southeast Asian culture, or ethnographic methods.

Jennifer Goodlander is an assistant professor in the Department of Theatre, Drama, and Dance at Indiana University. She has performed Balinese shadow puppetry in China, Indonesia, and around the United States. Her research focuses on the relationship between tradition and modernity as expressed through puppetry in Southeast Asia.