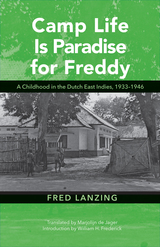 Camp Life Is Paradise for Freddy: A Childhood in the Dutch East Indies, 1933–1946
by Fred Lanzing
translated by Marjolijn de Jager
introduction by William H. Frederick

“Children see and hear what is there; adults see and hear what they are expected to and mainly remember what they think they ought to remember,” David Lowenthal wrote in The Past Is a Foreign Country. It is on this fraught foundation that Fred Lanzing builds this memoir of his childhood in a Japanese internment camp for Dutch colonialists in the East Indies during the World War II.

When published in the Netherlands in 2007, the book triggered controversy, if not vitriol, for Lanzing’s assertion that his time in the camp was not the compendium of horrors commonly associated with the Dutch internment experience. Despite the angry reception, Lanzing’s account corresponds more closely with the scant historical record than do most camp memoirs. In this way, Lanzing’s work is a substantial addition to ongoing discussions of the politics of memory and the powerful—if contentious—contributions that subjective accounts make to historiography and to the legacies of the past.

Lanzing relates an aspect of the war in the Pacific seldom discussed outside the Netherlands and, by focusing on the experiences of ordinary people, expands our understanding of World War II in general. His compact, beautifully detailed account will be accessible to undergraduate students and a general readership and, together with the introduction by William H. Frederick, is a significant contribution to literature on World War II, the Dutch colonial experience, the history of childhood, and Southeast Asian history.

Fred Lanzing was born in 1933 in the city of Bandung, Java, then part of the Netherlands East Indies. He is now retired from a long career as a teacher and administrator in the Amsterdam schools. He is the author of numerous articles and books on World War II and other topics.