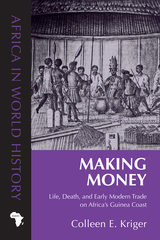 A new era in world history began when Atlantic maritime trade among Africa, Asia, Europe, and the Americas opened up in the fifteenth century, setting the stage for massive economic and cultural change. In Making Money, Colleen Kriger examines the influence of the global trade on the Upper Guinea Coast two hundred years later—a place and time whose study, in her hands, imparts profound insights into Anglo-African commerce and its wider milieu.

A stunning variety of people lived in this coastal society, struggling to work together across deep cultural divides and in the process creating a dynamic creole culture. Kriger digs further than any previous historian of Africa into the records of England’s Royal African Company to illuminate global trade patterns, the interconnectedness of Asian, African, and European markets, and—most remarkably—the individual lives that give Making Money its human scale.

By inviting readers into the day-to-day workings of early modern trade in the Atlantic basin, Kriger masterfully reveals the rich social relations at its core. Ultimately, this accessible book affirms Africa’s crucial place in world history during a transitional period, the early modern era.

Colleen E. Kriger is a professor of history at the University of North Carolina at Greensboro. She has received numerous grants and fellowships in support of her research. Her scholarship focuses on precolonial West and West Central Africa and topics such as social history, artisans, oral history, and material culture.