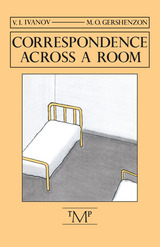 Correspondence Across a Room
by Vsevolod Ivanov and M. O. Gershenzon
translated by Lisa Sergio
Northwestern University Press, 1984
Paper: 978-0-910395-11-3
The twelve letters that constitute this volume were exchanged by two of Russia's leading intellectuals, who, in the summer of 1920, weakened by the privations of the Civil War, were admitted to a municipal rest home outside Moscow. At the Sanatorium for Scientific and Literary Workers, they found themselves installed in opposite corners of the same room.

Day-long conversations having drawn them away from their literary tasks, the two then decided to converse in writing. Correspondence, the result, examines the condition and future of Western culture-whose values, according to the historian Gershenzon, have deteriorated into a deadly burden upon mankind, into mankind's ultimate prison. For the poet Ivanov, it is not the disavowal of a cultural heritage but the struggle to recover man's own unity with God that alone guarantees his true, his spiritual freedom.
AUTHOR BIOGRAPHY
Viacheslav Ivanovich Ivanov (1866-1949) was a Russian poet and playwright.

Lisa Sergio was a translator. She died in 1989 in Washington, D.C.
REQUEST ACCESSIBLE FILE