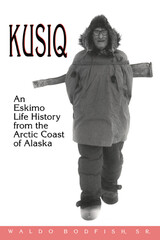 Kusiq: An Eskimo Life History from the Arctic Coast of Alaska.
by Waldo Bodfish Sr., Waldo Bodfish, William Schneider, Kisautaq-Leona Okakok and James Mumiġana Nageak
University of Alaska Press, 1991
Paper: 978-0-912006-44-4
If you are a casual reader who wants an intriguing glimpse into Eskimo life, a novice oral historian who wants to know how it is done right, or a student of Alaska who wants an Inupiat perspective of the changes that swept the western Arctic this century, read Kusiq.
(Journal of the West)

A vivid 'inside' account of an observant Eskimo male who mastered much of the traditional subsistence technology and lore and who lived through the end of commercial whaling, the development and decline of introduced reindeer herding and the fur market, and through World War II and its aftermath. In its scope as well as in the presentation of historical, cultural, and linguistic context,Kusiq is far more extensive than [other] autobiographies.
(American Indian Culture and Research Journal)

Kusiq represents a new wave in literature, the expressions of cultural awakenings among native American cultures, the attempt to redefine the native world in written form, to recast history, a history for too long the domain of the white system.
(ARCTIC)

It would be difficult to find a better, more interesting first-person account of Eskimo life during the first half of this century. [It is] second in an ambitious series of oral histories developed by the University of Alaska Press.
(Scan-A-Book)

The collaborators for this book include William Schneider, curator of oral history at the Elmer E. Rasmuson Library, University of Alaska Fairbanks; Leona Kisautaq Okakok, manager of the Arctic Education Foundation at the Arctic Slope Regional Corporation; and James Mumigana Nageak, coordinator of bilingual and multicultural instruction at the North Slope Borough School District. Schneider recorded and compiled Bodfish's stories, while Okakok and Nageak, both Inupiaq Eskimo language specialists, contributed their skills in interviewing, translating, and clarifying Inupiaq concepts. The book contains twelve chapters of Bodfish's narrative, background and commentary by the collaborators, and information on pronunciation, personal names, genealogical relations, and place names.
AUTHOR BIOGRAPHY
Waldo Bodfish, Sr., an Inupiat elder from Wainwright, a village on the arctic coast of Alaska, was asked to share his life story because it is important to our understanding of North Slope history and culture. Bodfish was a good observer with a keen interest in people, and he had an excellent memory for detail. Perhaps most important, he had a strong appreciation of the significance of the things he experienced.
TABLE OF CONTENTS