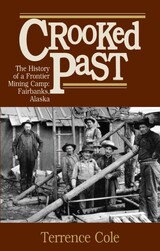 Crooked Past: The History of a Frontier Mining Camp
by Terrence Cole
University of Alaska Press, 1991
Paper: 978-0-912006-53-6
The crookedest street in Fairbanks, an Alaskan sourdough once said, is rightly named for town founder E. T. Barnette. Crooked Past, Terrence Cole's lively history of Fairbanks examines one of Alaska's most notorious con men. Barnette, a footloose fortune hunter who had served time in an Oregon penitentiary, came north during the Klondike gold rush of 1897-1898. He struck it rich after founding the city of Fairbanks in the early 1900s. Yet less than ten years later he was run out of the territory and allegedly disappeared in Mexico, becoming the most hated man in the town he founded and fled.
AUTHOR BIOGRAPHY
Terrence Cole is a history professor at the University of Alaska Fairbanks and the former editor of the AlaskaJournal. He earned a Ph.D. in American history at the University of Washington in 1983. He is the author of numerous works on Alaskan history, including Nome: City of the Golden Beaches (Alaska Geographic Society, 1984), and has written for American Heritage, Alaska Magazine, Pacific Northwest Quarterly, Journal of the West,  and other publications.
TABLE OF CONTENTS