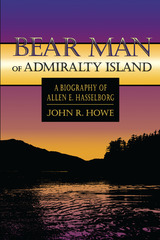 Bear Man of Admiralty Island is the life story of a rugged loner and self-taught naturalist who came to southeastern Alaska in 1901 to seek his fortune in the awe-inspiring wilderness but found his destiny instead. In the process, this sturdy Midwesterner learned the skills of a prospector, fisherman, trapper, guide, boatbuilder, and homesteader. At all these things he eventually excelled, but his greatest fame came from his greatest skill: he was a peerless bear hunter. He joined several natural history expeditions and worked for about ten years as a specimen collector and guide. He later guided sportsmen and photographers interested in Southeastern's wildlife and majestic natural beauty. As his respect for the great brown bears increased, he lost his interest in killing them, and his experiences inspired conservationists who lobbied to protect Admiralty Island from logging. Hasselborg's keen wit, fierce independence, and eccentric ways attracted much attention during his lifetime. He was an extraordinary man who was in some ways a perfectly ordinary Alaskan of his time, and author Howe reflects on both sides of that character in a balanced, detailed way.
AUTHOR BIOGRAPHY
John R. Howe currently resides in Cambridge, Massachusetts, where he directs an Internet/World Wide Website for writers and publishers. Between 1980 and 1992, while writing this book, he lived in Juneau, Alaska, working as a videographer, freelance writer, teacher, and conservationist. His articles on wildlife subjects have been published in Audubon Defenders, and Alaska magazines. He is a graduate of Stanford University and holds a masters degree in sociobiology and communications from San Francisco State University.
TABLE OF CONTENTS