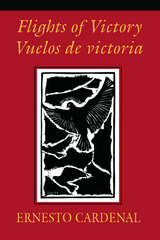 Flights of Victory/Vuelos de Victoria
by Ernesto Cardenal
translated by Marc Zimmerman
Northwestern University Press, 1985
Paper: 978-0-915306-74-9
In this bilingual edition, Ernesto Cardenal celebrates his country's successful revolution against the Somoza regime. Recognized world-wide as a major poetic voice from Latin America, he also has long been an activist fighting for political freedom, and he served as Nicaragua's Minister of Culture from 1979-1988. In Flights of Victory, Ernesto Cardenal reflects on events of recent Nicaraguan history with poems about the insurrection against Somoza, the triumph of the popular movement, and the reconstruction of the country, from the unique perspective of a poet-participant.
AUTHOR BIOGRAPHY

Reverend Father Ernesto Cardenal Martínez (born January 20, 1925) is a Nicaraguan Catholic priest and was one of the most famous liberation theologians of the Nicaraguan Sandinistas, a party he has since left. From 1979 to 1987 he served as Nicaragua's first culture minister. Cardenal was the founder of the primitivist art community in the Solentiname Islands, where he lived for more than ten years.  He is also famous as a poet, having authored more than 60 volumes of poetry, essays, and criticism.

Marc Zimmerman is an associate professor of Latin American Studies at the University of Illinois at Chicago.