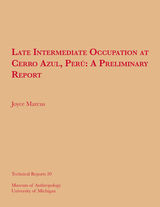 Cerro Azul was a late prehistoric fishing community on the south-central coast of Peru. It was one of several communities that belonged to the region of Huarco before falling to the Inca. This volume is the preliminary report of an interdisciplinary project carried out at the site from 1982 to 1986. The remains of many buildings exist on the site. During this project, crews excavated four of these, as well as middens and burials.
TABLE OF CONTENTS
Project Staff
Acknowledgments
Table of Contents
List of Figures
Introduction
Sixteenth-century Documents and Ethnohistoric Data
The Environmental Setting
The Site of Cerro Azul
Structure D
Fish Storage
Structure 9
Middens and Burials
The Inca Conquest of Huarco
Structure 1
Structure 3
The "Fortress of Huarco"
Conclusions
Bibliography
REQUEST ACCESSIBLE FILE