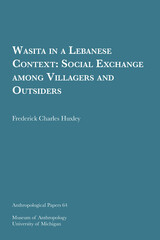 BUY
Wasita in a Lebanese Context: Social Exchange among Villagers and Outsiders
by Frederick Charles Huxley
University of Michigan Press, 1978
eISBN: 978-1-951519-07-0
Paper: 978-0-932206-62-6
In the 1970s, Frederick Charles Huxley conducted fieldwork in the Lebanese village of Barouk to investigate the social process called wasita: a term that means, roughly, intermediary or mediation. He explains the geography and history of Lebanon as they relate to the country’s social diversity, and argues for further examination of wasita as a process that operates on and between levels of society in economic, political, and social contexts. Following a detailed description of his ethnographic research, he discusses the importance of a better understanding of wasita in the context of the Lebanese civil war.
TABLE OF CONTENTS
Contents
List of Figures
List of Plates
Acknowledgments
I. Introduction and Theoretical Background
II. Ethnography of Field Site
III. Psycholinguistic Experiment
IV. Conclusion
Appendixes
Bibliography
REQUEST ACCESSIBLE FILE