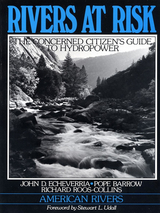 Rivers at Risk is an invaluable handbook that offers a practical understanding of how to influence government decisions about hydropower development on America's rivers.

John D. Echeverria was general counsel of American Rivers and the director of its National Center for Hydropower Policy. Prior to joining American Rivers in 1987, he was an associate with the law firm of Hughes Hubbard and Reed in Washington, D.C., and the law clerk to the Honorable Gerhard Gesell. Mr. Echeverria is a graduate of the Yale Law School and the Yale School of Forestry and Environmental Studies. A fisherman and canoeist, Mr. Echeverria has written extensively on energy and environmental matters.

Pope Barrow is an attorney with substantial experience in environmental and energy law. He is former director of the American White-water Affiliation. Mr. Barrow, an avid white-water enthusiast, has written extensively on river conservation issues. In 1987, in recognition of his exceptional contributions to river conservation, Perception, Inc., awarded Mr. Barrow the River Conservationist of the Year Award. Mr. Barrow is a graduate of Yale College and Harvard Law School.

Richard Roos-Collins was Deputy Attorney General in environmental law for the state of California. Previous to that position, he was a staff attorney with the Office of General Counsel of the U.S. Environmental Protection Agency in Washington, D.C. Mr. Roos-Collins was formerly publicist and litigation coordinator for Friends of the River, a San Francisco-based nonprofit organization dedicated to preserving California's wild rivers. He is a graduate of Princeton and of Harvard Law School.