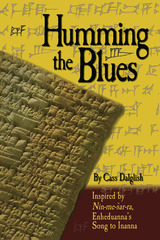 The first signed literature in the world is on cuneiform tablets written in 2350 BCE in Sumeria, and it is by a woman. Dr. Cass Dalglish translated the cuneiform of Enheduanna. She was a powerful Sumerian prince in 2350 BCE and her work, Nin-me-sar-ra, begged the god Inanna (who was the first to enter the underworld and return from the dead) for help overcoming an usurper.

Adopting a jazz aesthetic, Dalglish improvises on her translations; re-examining the cuneiform through feminist lenses. Enheduanna is not just any writer, she is the first identifiable poet to sign her writing. Lyrically translated from the original cuneiform by Cass Dalglish, the relevance of Enheduanna’s Song to Inanna echoes across millennia as a testament to the timeless power of women’s literature. Giving fresh interpretations to the originals, these poems form rhythmic riffs—like jazz musical improvisations—that carry the reader back to the lands of ancient Iraq during the time when gods were women.
TABLE OF CONTENTS