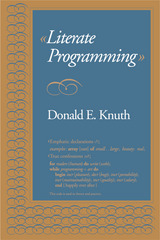 This volume is first in a series of Knuth's collected works.
TABLE OF CONTENTS