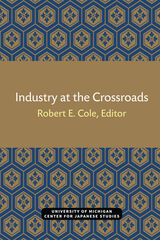 The mood of the first U of M U.S.-Japan Auto conference in January 1981 could only be described as electric. People wanted to know what our problems were and how we could begin to solve them. Inherent in the latter issue was the questions, what could we learn from the Japanese? One left the conference with a sense that there was a call for action, a mandate to address the problems facing industry.
The mood, about a year later, at the March 1982 U.S.-Japan Auto Conference was far more subdued. While undoubtedly this reflected the stream of statistics confirming the continually depressed state of the industry, another dynamic was possibly operating as well. Whereas the 1981 conference was "electric," a state of mind which flowed from a certain frustration at seemingly overwhelming difficulties and often vague expectations of what we might learn from the Japanese, the 1982 conference was more "workmanlike" in the sense that speakers discussed specifically what progress was being made in addressing problems. This more subdued, pragmatic approach continued throughout wand was reinforced by workshops held the day after the main conference.
Instead of discussing the virtues of the Just-In-Time system in Japan, speakers addressed the practical problems of introducing such a system in the U.S. firms. Instead of railing about the benefits or failings of regulation of the industry, they discussed what we could reasonably expect from regulation. Instead of exhorting the industry to adopt Japanese practices willy-nilly, they focused on some of the limitations of the Japanese model in a range of different areas. Instead of trying to identify some magic key to Japanese success in the automotive industry, they discussed the interrelationships among various factors. At the same, they continued to explore the basic issues transforming the auto industry worldwide. In this connection, they sought to unravel some of the complexities associated with the internalization of the auto industry and trade obligations under the GATT.
AUTHOR BIOGRAPHY
Robert E. COLE is Professor of Sociology at University of Michigan.
TABLE OF CONTENTS
Cover
Title
Copyright
Contents
Preface
Introduction
Opening Statement
New Directions in Auto Transportation Policy
The Legal Framework of International Trade: Problems and Prospects
The Internationalization of the Auto Industry: A Japanese Perspective
The Need for Local-Content Legislation
Responses of Conference Panelists to Audience Questions
Notes on a Trip to Japan: Concepts and Interpretations
Participative Work Practices in the Japanese Auto Industry: Some Neglected Considerations
The "Just-in-Time" System: Its Relevance for the U.S. Auto Industry
Learning From the Japanese?
Responses of Conference Panelists to Audience Questions
REQUEST ACCESSIBLE FILE