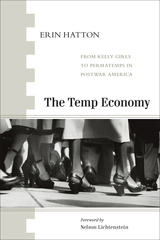 Everyone knows that work in America is not what it used to be. Layoffs, outsourcing, contingent work, disappearing career ladders—these are the new workplace realities for an increasing number of people. But why? In The Temp Economy, Erin Hatton takes one of the best-known icons of the new economy—the temp industry—and finds that it is more than just a symbol of this degradation of work. The temp industry itself played an active role in this decline—and not just for temps. Industry leaders started by inventing the "Kelly Girl," exploiting 1950s gender stereotypes to justify low wages, minimal benefits, and chronic job insecurity. But they did not stop with Kelly Girls. From selling human"business machines" in the 1970s to "permatemps" in the 1990s, the temp industry relentlessly portrayed workers as profit-busting liabilities that hurt companies' bottom lines even in boom times. These campaigns not only legitimized the widespread use of temps, they also laid the cultural groundwork for a new corporate ethos of ruthless cost cutting and mass layoffs.

Succinct, highly readable, and drawn from a vast historical record of industry documents, The Temp Economy is a one-stop resource for anyone interested in the temp industry or the degradation of work in postwar America.

Erin Hatton is an Assistant Professor in the Sociology Department at SUNY Buffalo.

Foreword by Nelson Lichtenstein
Preface
Acknowledgments
Introduction: The Temp Economy
1. The Making of the Kelly Girl
2. The Invention of the Semi- Permanent Employee
3. The Transformation of Work
4. Boxing In the Temp Industry
Conclusion: A Model of Work for the Twenty- First Century
Appendix: A Note on Sources
Notes
Index