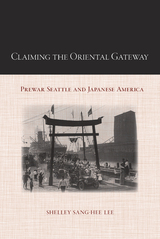 In Claiming the Oriental Gateway, Shelley Sang-Hee Lee explores the various intersections of urbanization, ethnic identity, and internationalism in the experience of Japanese Americans in early twentieth-century Seattle. She examines the development and self-image of the city by documenting how U.S. expansion, Asian trans-Pacific migration, and internationalism were manifested locally—and how these forces affected residents’ relationships with one another and their surroundings.

Lee details the significant role Japanese Americans—both immigrants and U.S. born citizens—played in the social and civic life of the city as a means of becoming American. Seattle embraced the idea of cosmopolitanism and boosted its role as a cultural and commercial "Gateway to the Orient" at the same time as it limited the ways in which Asian Americans could participate in the public schools, local art production, civic celebrations, and sports. She also looks at how Japan encouraged the notion of the "gateway" in its participation in the Alaska-Yukon-Pacific Exposition and International Potlach.

Claiming the Oriental Gateway thus offers an illuminating study of the "Pacific Era" and trans-Pacific relations in the first four decades of the twentieth century.

Shelley Sang-Hee Lee is an Assistant Professor of Comparative American Studies and History at Oberlin College.

"Claiming the Oriental Gateway is an important contribution to the understanding of diversity of Japanese American experiences and a valuable contribution to the field of Asian American Studies, U.S. urban history, and U.S. western history." —Karen Leong, author of The China Mystique: Pearl S. Buck, Anna May Wong, Mayling Soong Chiang, and the Transformation of American Orientalism.

Acknowledgments
Introduction
1. Multiethnic Seattle
2. Making Seattle “Cosmopolitan”
3. Making Local Images for International Eyes: Race, Nationality, and the Seattle Camera Club, 1924-1929
4. “Problems of the Pacific” in “the Great Crucible of America”: Public Schools in the 1920s and the 1930s
5. “That Splendid Medium of Free Play”: Japanese American Sports during the Interwar Years
6. The Eve of War
Epilogue
Notes
Selected Bibliography
Index