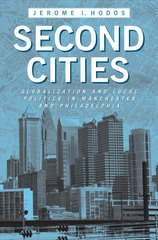 Manchester, England, and Philadelphia, Pennsylvania, are what sociologist Jerome Hodos calls second cities—viable alternatives to well-known global cities such as London and New York. In Second Cities, Hodos provides a thought-provoking, comparative look at these cities as he considers how Manchester and Philadelphia have confronted problems of globalization over the past two centuries.
AUTHOR BIOGRAPHY

Jerome I. Hodos is Associate Professor of Sociology at Franklin & Marshall College. He is a contributor to Social Capital in the City (Temple) and The City in American Political Development.