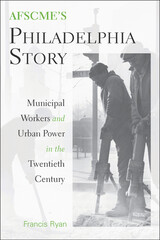 AFSCME's Philadelphia Story provides the most comprehensive account of the early years of the American Federation of State, County and Municipal Employees, which is one of the nation’s largest and most politically powerful unions in the AFL-CIO. Author Francis Ryan details the emergence of the Quaker City's interracial union, charting its beginnings in the political patronage system of one of the nation's most notorious political machines to the first decade of the twenty-first century. Ryan provides new insight into the working class origins of African American political power in the late twentieth century as well as a thorough overview of the role the municipal state played in the urban economy of one of the nation's largest cities.

Ryan describes the work processes and how they changed, and uses workers' testimonies to ground the detailed accounts of issues and negotiations. Beginning in the 1920s and ending in the 2000s, Ryan's study offers a long-term analysis of the growth of a single union in a major American city.

"This is arguably the most enlightening study of a municipal union movement yet written. AFSCME’S Philadelphia Story should become required reading for anyone who seeks to understand the rise of public sector unionism in post-World War II America and its intersection with urban politics and the movement for racial equality. By bringing these subjects together in one narrative, this book makes an indispensable contribution to the literature of recent American labor history." —Joseph A. McCartin, Associate Professor of History, Georgetown University.