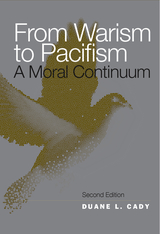 Duane Cady views warism and pacifism as polar extremes on a continuum that embraces a full spectrum of ethical positions on the morality of war and peace. Realizing that he could not intellectually defend the notions of just-war theory, he found that he was a reluctant pacifist. In this new edition of From Warism to Pacifism, Cady continues to expose the pervasive, subconscious warism that is the dominant ideology in modern Western culture. He explores the changes over the last twenty years—from the end of the Cold War to the ongoing “war on terror,” as well as Barack Obama winning the Nobel Prize for Peace.

Like racism and sexism, the uncritical presumption that war is morally justifiable, even morally required, misguides our attitudes and institutions. In its place, Cady proposes the development of a positive concept of peace. Citing common objections to pacifist values, he describes peace as something more than the mere absence of war and demonstrates that pacifism is a defensible position.

Duane L. Cady is Professor of Philosophy at Hamline University.

Normal 0 false false false MicrosoftInternetExplorer4 /* Style Definitions */ table.MsoNormalTable {mso-style-name:"Table Normal"; mso-tstyle-rowband-size:0; mso-tstyle-colband-size:0; mso-style-noshow:yes; mso-style-parent:""; mso-padding-alt:0in 5.4pt 0in 5.4pt; mso-para-margin:0in; mso-para-margin-bottom:.0001pt; mso-pagination:widow-orphan; font-size:10.0pt; font-family:"Times New Roman"; mso-ansi-language:#0400; mso-fareast-language:#0400; mso-bidi-language:#0400;} “The book is strong when it exposes our culture’s uncritical acceptance of war, when Cady shows that violent means are not likely to result in pacific ends and that peace has a harmonic and cooperative content and is not merely the absence of war. Moreover, the author shows that the usual objections against pacifism are answerable….A worthy contribution to the discussion of the morality of war." —Choice

Normal 0 false false false MicrosoftInternetExplorer4 /* Style Definitions */ table.MsoNormalTable {mso-style-name:"Table Normal"; mso-tstyle-rowband-size:0; mso-tstyle-colband-size:0; mso-style-noshow:yes; mso-style-parent:""; mso-padding-alt:0in 5.4pt 0in 5.4pt; mso-para-margin:0in; mso-para-margin-bottom:.0001pt; mso-pagination:widow-orphan; font-size:10.0pt; font-family:"Times New Roman"; mso-ansi-language:#0400; mso-fareast-language:#0400; mso-bidi-language:#0400;} “Cady is to be applauded for authoring a book which is a thought provoking and original contribution to peace and war studies. Teachers and students alike will benefit from his analysis which challenges us to critique the usually subconscious assumption of warism, to more critically investigate the ‘wealth of pacifisms’ which exist, and to explore the often ignored successes of nonviolence in history.”—Teaching Philosophy

Normal 0 false false false MicrosoftInternetExplorer4 /* Style Definitions */ table.MsoNormalTable {mso-style-name:"Table Normal"; mso-tstyle-rowband-size:0; mso-tstyle-colband-size:0; mso-style-noshow:yes; mso-style-parent:""; mso-padding-alt:0in 5.4pt 0in 5.4pt; mso-para-margin:0in; mso-para-margin-bottom:.0001pt; mso-pagination:widow-orphan; font-size:10.0pt; font-family:"Times New Roman"; mso-ansi-language:#0400; mso-fareast-language:#0400; mso-bidi-language:#0400;} “With his fair, careful, and balanced presentations of the ‘richness and variety’ of the various positions on the moral continuum of war and peace, Duane Cady has gone a considerable way in making ‘constructive relationships’ possible. Consequently, all who care and think about the issues of violence and war are in his debt.”—International Social Science Review

Introduction: A History of the Idea of Pacifism

Afterword: Nonviolence and the War on Terror