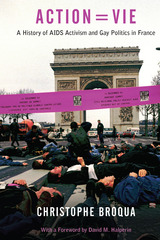 Act Up-Paris became one of the most notable protest groups in France in the mid-1990s. Founded in 1989, and following the New York model, it became a confrontational voice representing the interests of those affected by HIV through openly political activism. Action=Vie, the English-language translation of Christophe Broqua’s study of the grassroots activist branch, explains the reasons for the group’s success and sheds light on Act Up's defining features—such as its unique articulation between AIDS and gay activism.

Featuring numerous accounts by witnesses and participants, Broqua traces the history of Act Up-Paris and shows how thousands of gay men and women confronted the AIDS epidemic by mobilizing with public actions. Act Up-Paris helped shape the social definition not only of HIV-positive persons but also of sexual minorities. Broqua analyzes the changes brought about by the group, from the emergence of new treatments for HIV infection to normalizing homosexuality and a controversy involving HIV-positive writers’ remarks about unprotected sex. This rousing history ends in the mid-2000s before marriage equality and antiretroviral treatments caused Act Up-Paris to decline.

TABLE OF CONTENTS
Contents
Foreword to the English-Language Edition by David M. Halperin
Acknowledgments
Abbreviations
Introduction
The “Homophile” Movement
The Revolutionary Movement
Liberation Groups and Reformist Groups
The First Generation of AIDS Organizations
Protests and Public Expression of HIV-Positive Status
Emergence of Organizations of HIV-Positive Persons
HIV-Positive Status and Gay Demands
Didier Lestrade: A Path
Larry Kramer: Founder or Leader?
Claiming a Legacy
Conversions to Activism
Revelations
Interorganizational Positions
Rationales for Public Exposure and Journalistic Habitus
Firsthand Accounts, AIDS Organizations, and the Media
The Political Etiology of AIDS
Act Up and Michel Foucault: An Unexpected Connection?
An Indirect Influence (1)
“Biopower” and the Fight against AIDS: An Unsettling Analogy
An Indirect Influence (2)
A Positional Rejection or an Illegitimate Legacy?
Act Up versus Literary Representations of AIDS
The “Homosexualization” of AIDS under Debate
AIDS from the “Point of View” of Homosexuality
Building a Community
HIV-Positive Gay Identity as a Frame of Reference
Hierarchies of Experience and Identification
Act Up’s Gay Image
Act Up and the Gay Pride March
Gay Activists and the Fight against AIDS
Sexual Orientations and Proximities to AIDS
Social and Sociosexual Backgrounds
Degrees of Proximity to the Epidemic and Motives for Engagement
Gay Trajectories
Robin
Thomas
Paths of Gay Socialization
Bridging the Experiences of Homosexuality and AIDS
Ambivalences in the Recognition of People with HIV
6. The Rationale for Public Action
Strategic Emotions
Violence According to Act Up
Violence Attributed to Activists
Experiencing Violence versus Inflicting Violence
Self-Inflicted Violence
7. Activism, Grief, and Memory Politics
A “Grieving Machine”?
Act Up and Memorial Practices
Political Uses of Death and Memory
Naming the Deceased
Simulating Death
Political Funerals
Competing Memories
The Pink Triangle
Holocaust References
The First Sidaction and Its Impact
The Second Sidaction and Its Impact
The Fight for Recognition of Same-Sex Couples
The Threat of Outing
A New Identity?
Hope versus Despair
Hope and Memory
Act Up’s Dissolution under Debate
The Tenth Anniversary
The Controversy
Books as Mirrors (1996–1999)
The Activist Offensive (1999–2000)
The Conflict Escalates (2000–2004)
Evolution of Sexual Behaviors
Disengagement and Positioning Strategies
The Inexhaustible U.S. Model
The President’s Position
A Threatening Closeness
Barebacking as an Instrumental Frontier
Communitarianism as an Implicit Frontier
Competing Legitimacies
Transmission as an End and a Means
Splits
10. Changing Representations of Homosexuality
The Fight against AIDS and Gay Socialization
Specializations of Identity and Struggles for Recognition
Toward the Normalization of Homosexuality?
Between Normalization and Dissidence
The Freaks’ Parable
The U.S. Queer Movement against Assimilation
Act Up, the Queer Movement, and Normalization in France
Fantasy of the Murderous Gay
The HIV-Positive Gay as a Model
Activism and Imagination as Catharsis
Conclusion
Notes
References
Index
REQUEST ACCESSIBLE FILE